The Panafrican Digest is a celebration of that uniquely African form of journalism characterised by
excellent rhetoric, oratory, symbolism, sobering realism, scholarship, shrewd analysis, and accessibility
a journalism that always manages to challenge the status quo.

The Panafrican Digest is the most credible, non-partisan survey of Global African opinion and perspective,
and a facilitator of understanding among Africans all over the world.

The Panafrican Digest is significant milestone in the coming PanAfrican renaissance! 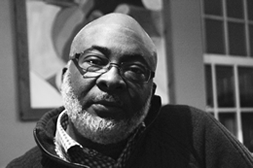 The PanAfrican Digest was founded by Ishmael Fiifi Annobil, the Ghanaian poet, journalist, photographer and filmmaker. Born in Accra, Ghana, he started writing poetry at the age of eleven, in 1969, inspired by Ghana’s Avant Garde poets of the time, chiefly Atukwei Okai, who subsequently became his mentor. Ishmael become a member of the Ghana National Association of Writers at nineteen, and after a short stint on Ghana’s Daily Graphic Newspaper as a proof-reader and freelance reporter, he emigrated to East Africa, living in Southern Sudan and Kenya, where he wrote, co-produced and performed the acclaimed multi-media show, Criers on the Thresholds of Reality, for refugees and the homeless. He subsequently worked on the Kenya Business Spotlight as a politics, economics, and arts reporter.

Ishmael relocated to England in 1983, and worked briefly on a London Diaspora magazine as deputy editor, before spending eleven years in Wales, where he founded the international poetry festival, Iolo’s Children and Wales’ first serious arts newspaper, Circa21. He is the founder of the international film collective, ,Stonedog Productions (Camden, London). An ardent screenwriter, producer and director, his films for Stonedog include In The Presence of Awe – The Transvangarde (art documentary), Kenji Yoshida – Artist of the Soul (art documentary), Salamander Walks, the surrealistic fictional narrative feature, and Hornsleth: Product of Love, a definitive documentary about controversial Danish artist Kristian Von Hornsleth. He has published two collections of poetry: Seven Horn Elegy and Ethiop, and an important monograph of his original GaDangme emblems, Abëtëi. His forthcoming books include Portrait of a Man in Pain (novel) Inklings of Clay(novella) and U topia of the Worms (poetry). Ishmael studied Social Anthropology extramurally at Goldsmith’s College, and took a PgDip in Visual Communications at West Herts College.